Welcome to the online home of the Double Down Daredevils!   We are a Minnesota based Bluegrass Band playing Bluegrass and Americana music with a special emphasis on 2, 3 and 4 part vocal harmonies.    As you explore our website, you will find video and audio clips, photo's, song-lists and performance calendar and more!

Wow.  After January and February being so quiet March has come in like a lion musically for the Daredevils !    First we were honored to be chosen to open for the Headline band -Mile 12- at MBOTMA's Winter Bluegrass Weekend festival.   We had a good show and a great time on the main stage and really all weekend long!   Then, just a week later we were asked to open for the Gibson Brothers at the Cedar Cultural Center!   Can't wait to see what comes next! 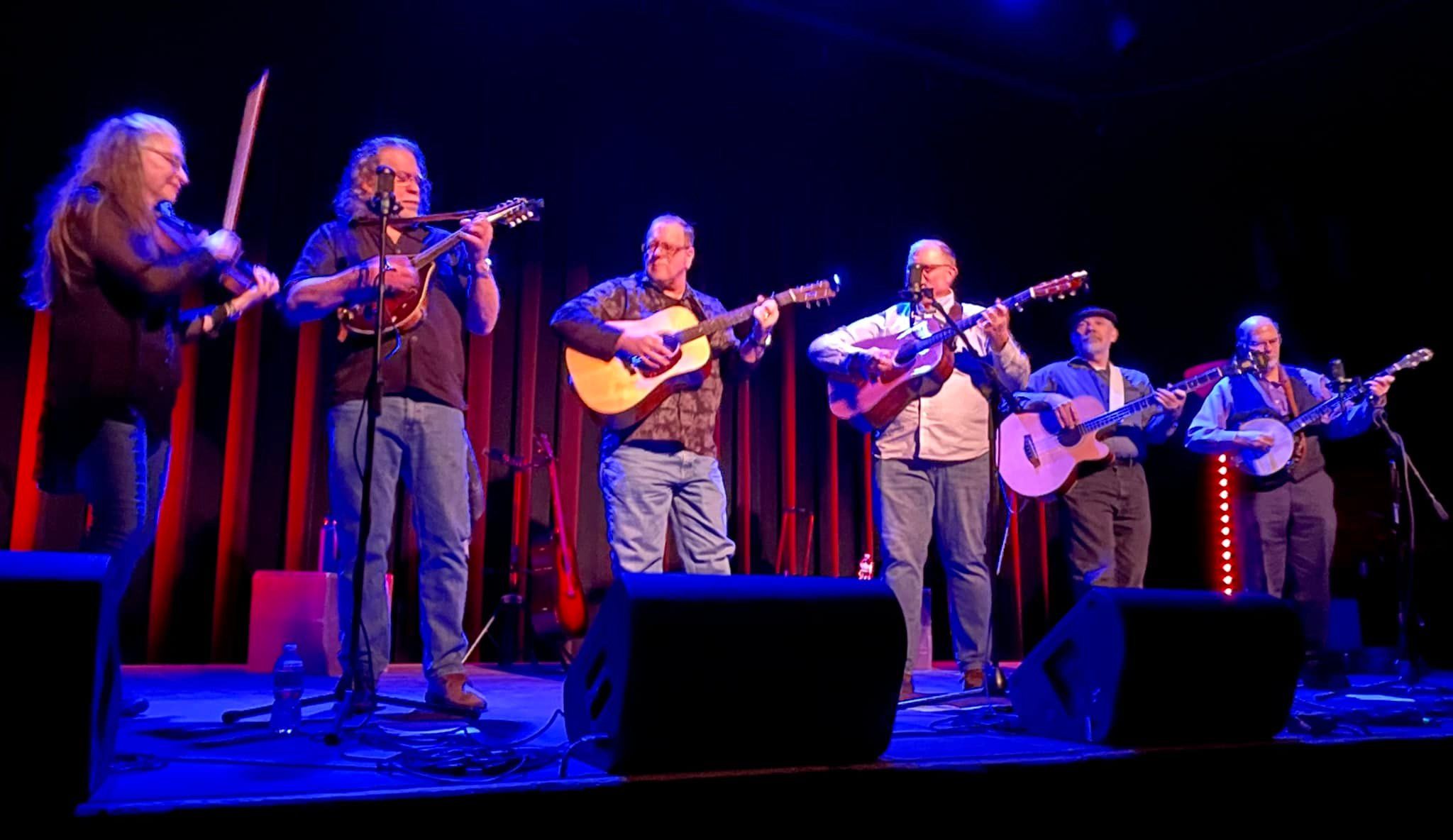 Double Down Daredevils to Open for The Gibson Brothers a the Cedar!

News Flash!    The Double Down Daredevils will open for The Gibson Brothers at the Cedar Cultural Center in Minneapolis, Saturday March 12th!     This is a BIG deal !   The Gibson Brothers have been an inspiration to us from the very start.  In fact, at the beginning of this band, Nathan and I covered so many of their songs we used to joke that we were a Gibson Brothers Tribute band!    To be opening for them is just amazing, and at the Cedar no less.   True confession here:   I have a personal list of venues that I want to play "someday" and the Cedar is near the top of that list!    This is going to be so exciting.    Tickets are available Click Here    See you at the Cedar on Saturday!

Okay, I know it's been a while since I posted here.   We had this little pandemic thing kinda took the wind out of the sails for a little while. but... it's 2022 and we are moving forward with a bunch of exciting news!

The Double Down Daredevils have been chosen to be the local opening act for National Headliner "Mile 12" at MBOTMA's Winter Bluegrrass Weekend !    We will be on the main stage Saturday night at 7 pm.   Get all the information and tickets at:  https://www.minnesotabluegrass.org/    Hope we see you there !

Wow.  The new Year is here already.  It's going to be another exciting year for the Daredevils!    We are heading for the studio (FINALLY !) late in January to record our first CD. Still somewhat fluid but it looks like about 60% original songs and the other 40% will be covers carefully chosen to highlight our strengths    This will be a process I'm sure and really exciting for most of us who have never done any studio recording before.  I hoping to have some photos and video of the sessions I can share in this blog so stay tuned!

Pretty much taking January and part of February off from performing to focus on the recording project but then we'll be back at it with the Big Turn Festival in Red Wing, February 21st and 22nd   We play at 7 pm Saturday at United Lutheran Church.  This is a BIG deal folks.  200 bands in more than 20 venues in downtown Red Wing.    Check out   The Big Turn Website for tickets and schedule information.     Then in March we will be at the MBOTMA Winter Bluegrass Weekend doing some of the songs from the new CD.   Check out MN Bluegrass.org for all the details on that event!     The following Saturday, March 13th we will be at Juniors in River Falls!  A new venue for us and we are so excited to play there!   That's going to be a Fun 3 hour show you won't want to miss!

For those in the Red Wing Area, I will be offering a songwriting workshop on February 5th at the Red Wing Arts Association Gallery.  That's in the Depot in Red Wing.  This will be the first of what the Arts Association hopes will become a series of "First Wednesday Workshops" on various topics of interest to the creative community in Red Wing and the surrounding area.   I'll share a few of my songs, along with some insights into the craft of songwriting as I have experienced it so far.

The calendar page  (Shows) will be continuously updated now as more booking are solidified for the year.    so be sure to check back often and come and see us when we are in your area! 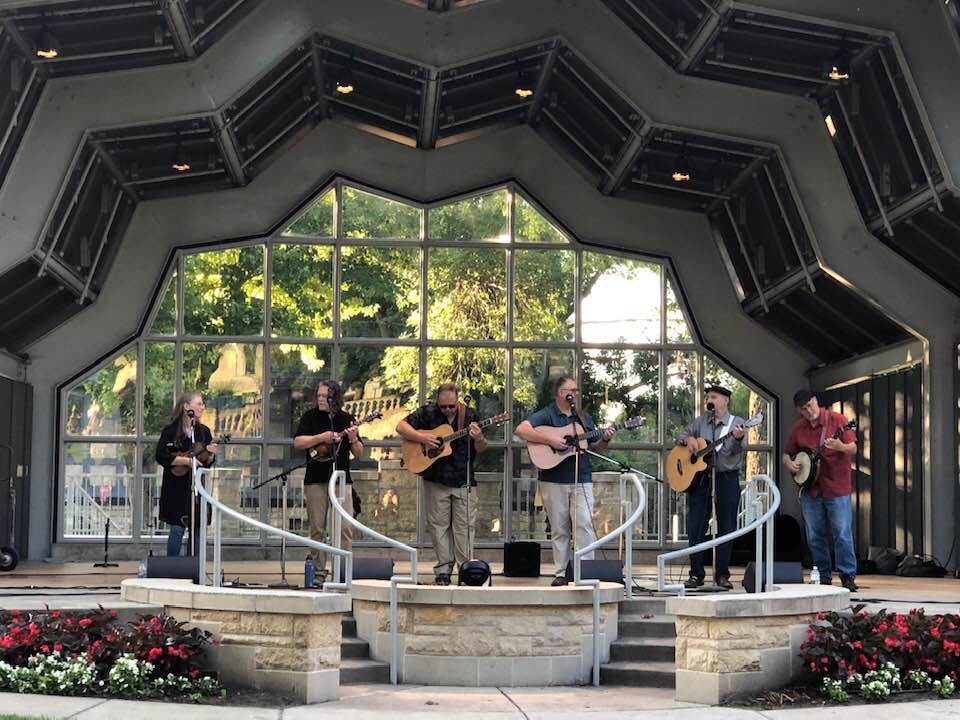 3 years ago, about the time we started this band actually, I made it a goal to play on this stage.   Check another one off the bucket list !!  We played the Central Park Bandshell... what we like to call Red Wings Living Room, last night as part of the Red Wing Arts Association Summer Concert Series. And it was every bit as much fun as I'd hoped it would be.    Great audience  (we are guessing 350 or so?)   and we had the absolute best weather all summer.   Low 70's no humidity and no bugs.   I couldn't have ordered it any better.    We played for almost 2 hours with a very short  break and I could have kept going..  It was the kind of show.that reminds you why you do this.   Professional sound by Mike Murphy.  The band was "on it"  Tim actually set his bass amp on fire.....  No literally, smoke and everything.     It's now 24 hours latter and I still want to grab  my guitar and run back out there.    Too much Fun !

Another Minnesota Bluegrass August Festival is in the books.  This one was the 40th Anniversary, and what a  celebration it was!   I don't even remember how many of these festivals I have been to now but El Rancho Manana feels like a second home to me now and when we all gather there for the weekend, it feels just like a family reunion.   This year I was there for 4 days and 4 nights and it still wasn't near long enough.  The weather was beautiful - well, okay we could have lived with a little less rain on Saturday but at least it settled the dust.   The Ranch House stage was rocking every night.  There is just so much talent assembled there!   Couple of highlights for me was the Mabel and Me set at the Ranch House on Thursday.   Friday night the Double Down Daredevils did a full hour show at the Ranch House.  Saturday Guitar Showcase on the Showcase Stage with Clay Hess, Mike Cramer and Stash Wyslouch.   All three are amazing guitarists.  Stash probably has the most interesting story having found his way into Bluegrass and Old Time Music via punk / heavy metal   Saturday night Headline show was Ricky Skaggs and Kentucky Thunder.   I've been watching Ricky Skaggs since he was in Emmy Lou Harris' Hot Band.    The man puts on a show!.  It's very well put together from an organizational standpoint.   You can tell this was not just 7 guys who got together under a tree somewhere and said "hey, we should start a band"   He sang a bunch of the old favorites like "Uncle Pen" along with some newer songs.  Kinda heavy on the instrumentals for my taste but with pickers like that I didn't really mind so much!  I'd been hoping for a version of "Country Boy" but alas, that did not happen.    Clay Hess spent some time in Kentucky Thunder as the hot picker.   At the showcase he said that going into Rickys band he knew he would have to be rock solid at 200 beats per minute.  For anyone who doesn't know.... that's really fast !     Of course the jamming was awesome too.   All day and on into the night till nearly dawns early light.   Funny how you can be so bone tired you can barely keep your eyes open and then somebody says "it's your turn" and you pick something you hope you can remember in your somewhat addled state, and you turn in one of your best songs of the evening!

The 40th Anniversary Festival will be one of those events that sets the bar for all future festivals.   It was so much fun it never even occurred to me to take any pictures

"From Moville to Red Oak"

Here is video #4 from our night at the Hastings Community TV station in June.
This one is an instrumental written by Phil Nusbaum called "From Moville to Red Oak".   Hope you enjoy it.

Here is video #3 from our night at the Hastings Community TV station in June.
This is the second song written and sung by Brin Peterson called "She's Not Here".   Hope you enjoy it.

Here is video #2 from our night at the Hastings Community TV station in June.
This one is a Tom Peschges original called "Minnesota Morning".  Hope you enjoy it.

The next one should be up very soon.  Thanks for watching!

We are very excited to share the first of 4 originals with you.  We recorded the videos last month at the Hastings Community TV station.  The team over there did a fantastic job and we had a great time making them.

The first song is "Home", written and sung by our own Brin Petersen.  We can hardly wait to share the rest of them with you as they are released on the "Around the Mic" sessions on their Facebook and Yahoo pages.  Check back soon for the next installment!